Crivvens! I’ve gone over to the dark side! The local society has a go-to mount and it’s now in the observatory with an 8″ Celestron Schmitt Cassegrain on it. And I’ve spent several hours already with it. 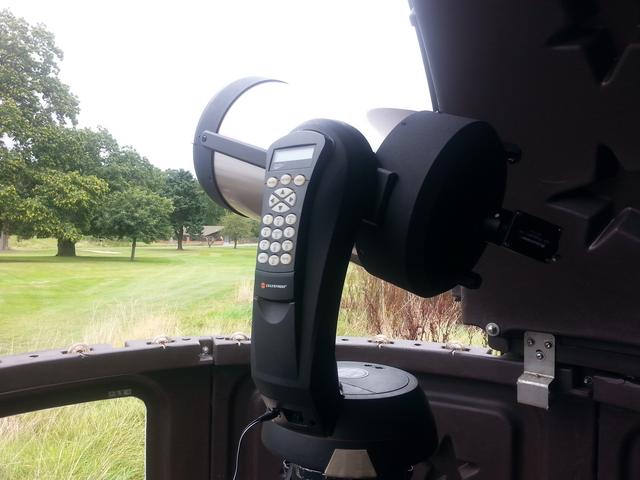 The alignment process is actually quite easy once you know what you’re doing. I’ve spent a few hours faffing unnecessarily due to the scope being upside down when I did the North alignment the first night, and last night I got confused with the two star alignment process. But by the end of the evening, (I was there four hours with a friend from the society), I’d got it aligned pretty good. Dew on the glass and a 3/4 Moon stopped any real deep sky observing, but I do have a short list of objects…
M13 Globular Cluster in Hercules – very bright in 25mm eyepiece.
M92 Globular Cluster in Hercules – smaller but still really pretty.
Saturn, low in the south west but nice and sharp in the 25mm eyepiece. We tried a 9mm but the lower power was much more pleasing. Two weeks ago I saw banding on the disc in the Elan Valley, I could almost tell myself tonight I could see the same.. but …
M27 Dumbbell Nebula in Vulpecula – Much brighter than I expected, dumbbell shape easily seen.
M57 Ring Nebula in Lyra – again, nice and bright, green tint?
M56 Globular cluster in Lyra – very dim, quite large in 25mm but looked more nebulous than starry. Only really seen when the scope moved or using averted vision.
M81 Bode’s Galaxy in Ursa Major – Most interesting, saw Bodes at 7.9 mag (Messier Album Mallas/Kreimer) but couldn’t see M82 at 8.8. Proving the limiting magnitude for that part of the sky (Ursa Major was quite low, and it really wasn’t fair to go galaxy hunting on such a bright moonlit night).
M36 across the other part of the sky showed only the brightest stars of this fine open cluster. So after some average lunar photography (in which I found my Canon with T-ring and barlow will get good focus with the 8″ Celestron, hooray!), and a dewy glass, we shut the dome at 12.30. Very pleased though, to eventually aligned the mount, and once a small glitch with the cable connector being loose is rectified, it’ll be full steam ahead for some useful observing.
The morality of using a go-to, of course, is another subject for another time. I have lots of thoughts on that!